Juneau Arts & Humanities Council > About > In memory of Ivan James

In memory of Ivan James 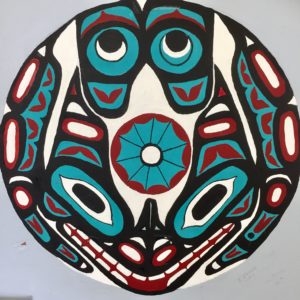 We noted with sadness the passing of Ivan James.

Mr James was an artist from Kake who served his country in the National Guard. He was stationed in the old Armory, now the Juneau Arts and Culture Center, in 1971.

That year, the Armory served the community as the morgue at the time of the airplane crash that claimed the lives of 111 people, including many local dignitaries.

Mr. James had painted a killerwhale at one time for the Guard commander, and as the Armory was being cleaned and repainted following the disaster, the commander, knowing his talent and skill, asked him to paint designs and murals on the walls and doors to honor the lives of those lost.

When we moved into the Armory and converted it to the Juneau Arts and Culture Center in 2007, the murals were still there. Mr. James would come by occasionally to talk and to help repair some of the paintings. We enjoy those murals to this day.

Our thoughts are with his family at this time. We will remember him warmly for his service to our country and to our community as an artist and as a serviceman

This image is Sculpin, one of his favorite designs. It is on the east door to the JACC Gallery.

Your ticket for the: In memory of Ivan James

In memory of Ivan James